Hello Everyone. Have you ever used “used to + ing” in your English communication activities? Yes, you are right. We often have to use this pattern when we communicate with others. But, do you know the meaning of the pattern? See info below if you are not sure.

“I’m used to something/verb + ing” means it is not new or strange for me to something/to verb + ing. Let’s see the following examples.

Do not confuse I am used to doing  with I used to do. They are different in structure and in meaning. to be  used to + ing means isn’t strange for me.
I used to do something means that I did something regularly in the past.  You can ‘t use this structure for the present.  Let’s see the following examples. 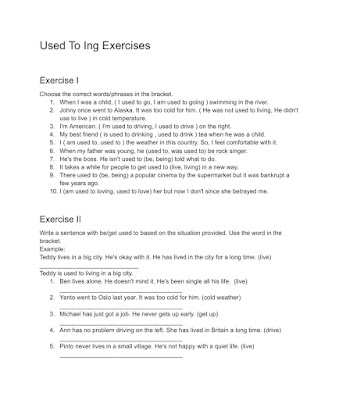 Choose the correct words/phrases in the bracket.

So and Too
Present Continuous vs Present Simple
Indirect Speech
Can, Could and Be Able To
Conditional Sentences
Enough and Too
Adjectives To Infinitive
Comparative and Superlative Adjectives
Conditional Sentences Type 1
Adjective Word Order
Question Tags Exercises with Answers
FacebookTweetPinLikeLinkedInEmailShare

One thought on “Used To + Ing Exercises with Answers”

Share this ArticleLike this article? Email it to a friend!
Email sent!